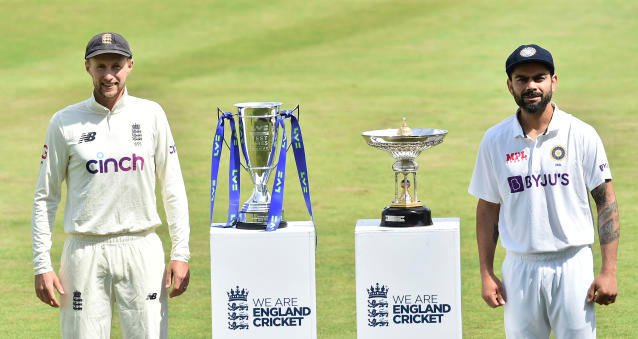 There were doubts over the fifth test but with all Indian players returning negative RT-PCR tests unofficial it’s confirmed that the test match will go ahead as scheduled. The boards have officially not released any statement on players availability as it’s believed that a few Indian players were close contacts of Yogesh, a clear picture is awaited.

It’s the final test of the English summer before focus shifts to T20 cricket with IPL and T20 World Cup on schedule, India after a historic win at Oval will look for a win to bag a series in England after 14 long years and England will look to outperform India to level the series 2-2 to save a home soil series defeat.

Rohit’s absence can see Mayank Agarwal opening the innings with KL Rahul and Hanuma Vihari or Suryakumar Yadav for Cheteshwar Pujara’s unavailability. Virat Kohli’s found some good rhythm and will look to capitalise for a big summer finish and Ajinkya Rahane is likely to play despite the bad run it being the last game of the series he does have a chance to use and make it count. Rishabh Pant did find good rhythm in the 2nd innings, batted sensible and looked compact on the crease, hopefully carries the same momentum into the final one. Ravindra Jadeja was promoted up to bat and isn’t a bad move and is a move for long run that will surely credit India and Jadeja.

Bowling, Shardul Thakur the bowler has always been effective, Shardul the batter has come as a huge bonus for India, Umesh Yadav did bowl well and is likely to play, one of Siraj and Bumrah might be given rest as there’s been a lot of work load put in by both and India do have option in Shami who’s now fit and if India rest both Ishant Sharma can have a final run or Prasidh Krishna’s debut can be expected. India will have to go a pacer short to play Ashwin and the weather isn’t very promising and might force India to keep Ashwin out of mix.

England have recalled Jos Buttler and Jack Leach for the final Manchester test, England again saw a batting collapse but this time it was the fragile middle order that left the scorecard untouched despite openers foundation. Rory Burns and Haseeb Hameed have done well but one has to put up an impactful three digit score. David Malan has had many average outings and England at no 3 don’t really have an option better than Malan and is likely to play. Joe Root’s missed out on couple of innings and will look to gather himself and finish the summer on high, Jonny Bairstow who just hasn’t got going is likely to miss as Jos Buttler’s back and will dawn the gloves, Ollie Pope should remains in the side after his excellent 81.

Moeen Ali’s done good but he can and has to show a better batting displays, has to deliver with the bat. Chris Woakes has been a big positive for England and will wish he carries the same momentum to the final test with both bat and ball. Bowling for England has been excellent but in short speels and a weak link is releasing pressure, England will reconsider James Anderson’s and Ollie Robinson’s selection but with it being the last game of the series Anderson and Robinson might just push a bit more. Overton hasn’t looked a lot effective and with Mark Wood’s availability that swap is on cards. Jack Leach is recalled but only fits if they go with 2 pacers and Chris Woakes, weather isn’t promising and might rule out spinners.

Weather at Manchester isn’t good, rainfall predicted 4 out of 5 days of the test match, India with a 2-1 lead wouldn’t mind but England desperate for a win to level the series to save a home soil defeat will wish for better weather conditions.

The series is alive, the final test turns out to be the series decider, a thriller to wrap up the English summer.