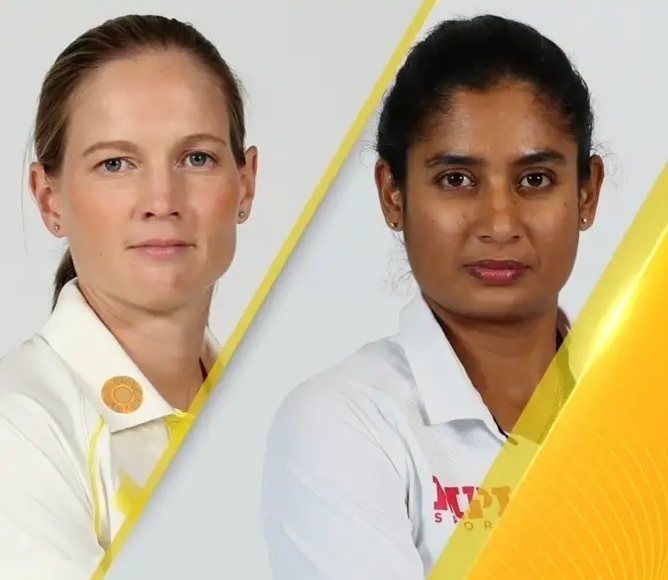 After a disappointing rain affected opening day of the historic test it again was no different as rain and thunderstorm made their way to the Metricon Stadium and played a spoilsport.

First session of play; Smriti Mandhana and Punam Raut made their way out, Gardner completed her over and Ellyse Perry from the other end striked early in the 2nd over of play but was a no ball and Smriti Mandhana was given a life batting on 80, Annabel Sutherland from the other end started well and was pace from both ends. Both Punam Raut and Smriti Mandhana settled in and the duo got to their 50 run stand; 150 was on board for India and Smriti Mandhana got to her maiden test century in style with a boundary and it’s come in a day-night pink-ball test doesn’t get any better, brilliant innings. Smriti-Punam continued to stitch up a brilliant partnership and Australia finally after 59 overs of play got Georgia Wareham to bowl and it was Gardner from the other end, all spin attack for a while. The duo of Smriti-Punam continued to play well, excellent footwork from both against the Aussie spinners and the partnership saw a century run stand and soon Australia finally had a breakthrough as Ashleigh Gardner in a brilliant spell of bowling got the reward and was of a set Smriti Mandhana on 127(216); a deserving wicket for Gardner that got curtains to an excellent knock by Smriti Mandhana. Mithali Raj joined a set defensive Punam Raut who was the rock, held her end tight and Australia got pacers bowling from one end with spin on other and 200 was on board for India. New ball was available but Australia stuck to old one and gave an over more to Sophie Molineux who got a reward; Sophie Molineux found the outside edge of Punam Raut on 36(165), was a half-hearted appeal by Australians and the umpire didn’t give it out but Punam Raut walked back, that’s great spirit shown with no DSR; with all honesty walked back for a fine 36. Australia take the new ball, Yastika Bhatia joined a set Mithali Raj and got off the mark straightaway in test cricket and soon was time for dinner. Mithali and Yastika walk back unbeaten on 15 and 2 respectively, Australia picked up two wickets in the opening session, both of set batters; the bowling was an improved effort by the Aussie quicks and spinners too.

Second session; Mithali and Yastika made their way out, early in the session Mithali on 23 was given a life by Beth Mooney who failed to grab a catch in slips and a wicket wait for Ellyse Perry continued. Yastika wasn’t that comfortable on the other end but soon found her zone and put up few beautiful shots on display before being dismissed on 19 and Ellyse Perry had a wicket to her name, Beth Mooney this time with a great diving catch completed the wicket making no mistake; Yastika look to play on the leg side closed the bat face early and a leading edge was caught at slip corden. Ellyse Perry had found her lost bowling rhythm and was right on money, she was knocking the wicket door and was finally rewarded. Deepti Sharma walked in and looked composed straightaway; had good scoring intent. Australia had a wicket more in quick succession and was a big one as a confusion in the middle saw Annabel Sutherland nail a direct hit to run out Mithali Raj on 30. Taniya Bhatia was next in; she’d faced a couple of overs and was yet to get off strike before lightning struck and the play was halted. Taniya and Deepti not out on 0 and 12 respectively walked back, the bowling effort from the Australians had seen an upward graph.

Players take early tea but there was no play post tea as well and that was stumps on day 2 at Metricon Stadium. Even day of play, both Australia and India will be happy with the position they are in but Australia will wish for few early wickets and India will look to bat a session more with good intent and might look to declare hoping for a result in this test.