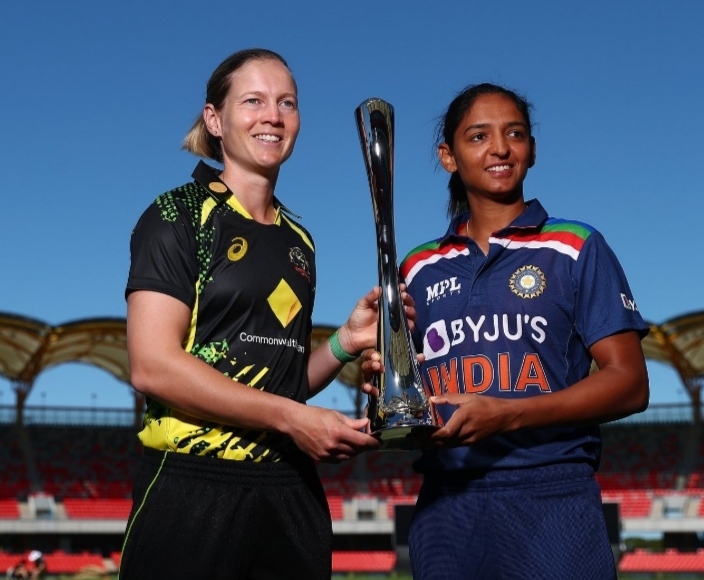 It’s been an exciting series so far, starting with the 3 match ODI series, then the one-off pink-ball test and now the 3 T20I’s that’ll decide the faith of the ‘India/Australia Women’s series trophy’.

India were off to a great start with Shafali getting things underway with a maximum before Smriti Mandhana joined her in collecting boundaries. 4th over of play, Ashleigh Gardner was in to bowl and dismissed both openers Smriti and Shafali on 17 and 18 respectively. Harmanpreet Kaur and Jemimah Rodrigues were next in, Harmanpreet Kaur on return fired in 12(5) before being dismissed lbw to Sophie Molineux. Yastika Bhatia was in the middle, Jemimah went well on the other end as she collected boundaries in regular intervals and did well to run the 1’s and 2’s on offer, Yastika didn’t look that comfortable but did well to hang in there. At halfway mark India were 3 down for 85; India were past the 100 run mark in the 12th over and a crucial 51 run partnership between the duo saw curtains with a struggling Yastika walk back for 15(15) as Georgia Wareham struck ball 1. Richa Ghosh was next in and didn’t look comfortable but managed to get the boundaries, doesn’t matter how they come until they come. Rain interrupted and concluded India’s innings with 131-4 on board; Jemimah Rodriques unbeaten on 49 and Richa Ghosh unbeaten on 17.

Australia with the ball did hand India many freebies but the bowling didn’t have many extras on show. Tayla Vlaeminck on return did a decent job but wasn’t rewarded, 0-32 in her 4. Couple overs bowled each by Sophie and Carey and were on the expensive side with Sophie having a wicket to her name. An over each by Ellyse Perry, Hannah Darlington and Tahila McGrath; Georgia Wareham bowled a couple more than an over. Standout for Australia, Ashleigh Gardner was expensive but had a couple of wickets to her name.

The rain didn’t clear in time to get the 2nd innings underway before the cut-off time as a result the match was called off and both teams share a point each. Couple more T20I’s on schedule; back to back games on 9th and 10th that’ll decide the winner of the ‘India/Australia Women’s series trophy’ that Australia currently lead 7-5.

Australia wouldn’t mind the result, India despite losing wickets didn’t let momentum slip and their aggresive mindset was brilliant to watch; each on display had a good start but failed to convert with Jemimah being the standout who carried her start and played brilliant for her 49*. Australia again were caught on the backfoot and having seen India’s intent will look to come in with better plans for the final 2.